On Tuesday, September 20, 2016, the Futures Initiative kicked off the second year of our University Worth Fighting For series with the event, “Racism, Xenophobia, and Populism: The Miseducation of the Public.” We were delighted to welcome a panel of exceptional speakers, a full audience, and an engaged group of online participants for this crucial and timely discussion.
The panel discussion was organized against the backdrop of the 2016 U.S. presidential elections. Nativist and xenophobic discourses have been central to the political campaigns and media of this election cycle. During both major parties’ primaries, candidates and their campaigns have deployed populist rhetorics. The GOP presidential candidate has, in fact, built his campaign around white supremacist ideologies and set forth policies to contain, deport, ban—in short, enact multiple forms of violence upon—people who are Black, Latinx, Muslim, immigrant, and LGBTQ.
At a time when our public discourse is awash with vitriol, we invited three panelists to speak about—and against—racism, Islamophobia, and xenophobia, in relation to public education and the (mis)education of the public.

Our first speaker, Mary Phillips (Assistant Professor of African and African American Studies at Lehman College), spoke about her research on the role of Black women in the Black Panther Party, with a focus on the activist Ericka Huggins. The popular image of women in the Black Panthers is one of background characters or silent partners. In contrast, Phillips argued that women were involved in every aspect of the Party and the broader movement, including the running of free breakfast programs, cooperative housing, educational initiatives, newsletters, and electoral campaigns. Phillips connected her historical research on Black Panther activism to the work of Black Lives Matter and the Movement for Black Lives. Phillips argued that these contemporary movements integrate the Black Panther movement’s organizing strategies in critical ways, with their emphases on self-defense, building collective power, restorative justice, and love. She noted that Black Lives Matter is an intergenerational and communal network that was started by three queer Black women—Patrice Cullors, Alicia Garza, and Opal Tometi—and raised the question of why violence against Black women and girls does not have the same visibility as the police murders and assault of Black men in the United States.
Jessie Daniels (Professor of Sociology at Hunter College and The Graduate Center), presented her research on white supremacist rhetoric online and in mainstream politics. She introduced this work through an anecdote from her teaching in the mid-1990s. When her students turned to the Internet for research, Daniels found that white supremacists were all over the web. Some of these websites were overtly racist, while others were “cloaked” websites that intentionally disguised their authorship–largely by using names and images from civil rights and racial justice activisms– to conceal a political agenda that advances racist and supremacist narratives. Daniels also examined and compared the use of white supremacist rhetoric in mainstream national politics during the 1990s and in the 2010s. In the 1990s this rhetoric could be found in national campaigns across the political spectrum, from Bill Clinton to Pat Buchanan. Now it is easier to access, global, and more participatory. Daniels’s core insight was that white supremacist rhetoric today makes debatable hard-won political victories around issues of race, including the meaning of slavery and its legacy.
Right-wing political candidates continue to amplify racist and supremacist messages in their campaigns. By way of example, Daniels directed the audience to the GOP presidential frontrunner’s use of Twitter: In one week in January 2016, 62 per cent of the candidate’s retweets were of users with white supremacist connections.
Linda Sarsour (Executive Director of the Arab American Association of New York) spoke about her work as a civil rights and racial justice activist. Sarsour spoke as an activist with a lifelong connection to public education in New York: An alum of Kingsborough Community College and Brooklyn College, CUNY, she felt shortchanged by her education in New York’s public schools; today, her three children attend the city’s schools.
Sarsour’s remarks focused on three main areas. First, she discussed the rise of Islamophobia in the United States, and the mischaracterization of Islam in this country’s media and public discourse. Sarsour linked the othering of Muslims to U.S. foreign policy failures, as a result of policymakers’ misunderstanding of the roots of global terrorism. She called for deep critical thinking to understand and address these issues. Sarsour then questioned the rhetoric and meaning of patriotism today, by asking “Who do we think is a patriot?” and linking this image to U.S. racism and white supremacy. Sarsour argued for a counter-image of patriotism based on dissent, and of patriots as those who speak up in the face of oppression and atrocities. She also critiqued the commonplace allegation of “reverse racism” in response to critiques of white supremacy. While everyone has bias, as Sarsour noted, “Racism is bigotry plus power.” Finally, she concluded by looking at the whitewashing of civil rights history, and recounted learning about Rosa Parks’s years of organizing before she took a seat on the bus. After expressing her hope that public education would one day be seen as a “woke” curriculum, Sarsour said, “I’m woke now, and I hope I never go back to sleep.” 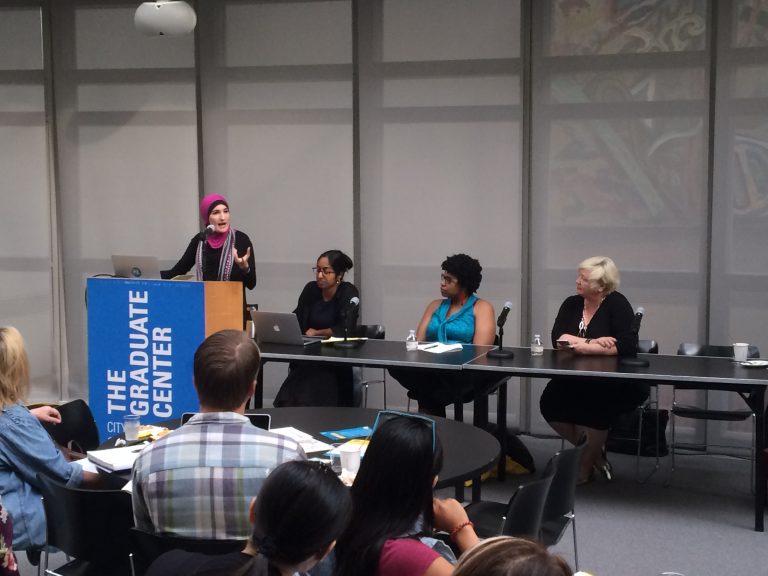 The panel concluded with a twenty minute Q&A session. Audience members asked questions about topics ranging from a local hearing on Resolution 1058-A to prohibit Boycott, Divestment and Sanctions (BDS), to the meaning of the word “radical” and its legacy, and tips for young journalists writing about the issues explored in the panel.

For those of you who missed the event, check out these resources:

During the Q&A, one community college professor asked panelists to provide resources for a Critical Thinking course to connect students to multiple stories about the issues discussed. The panelists responded with the following:

The above resources and more can be found in this list, in the event’s Google Doc. We welcome suggestions from colleagues thinking and teaching about race and racism, Islamophobia, migration, and the problem of xenophobia.

The CUNY Humanities Alliance exposes graduate students to the best ways to support humanities education in the community college context, while expanding access to the humanities for undergraduates from BIPOC and immigrant communities served by the City University of New York. Read more…

With generous support from:

Except where otherwise noted, content on this site is licensed under a Creative Commons Attribution-NonCommercial-ShareAlike 4.0 International license.

Need help with the Commons? Visit our
help page Send us a message
Skip to toolbar

Built with WordPress Protected by Akismet Powered by CUNY